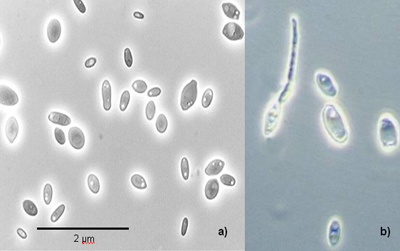 reproduction by budding; cells are spheroidal, subglobose to ellipsoidal, often ogival or cylindroidal to elongate. Average size is 2.0-5.5 by 3.0-22.0 um. Cells take many forms including single, pairs short chains and clusters.    Pseudomycelium are branched, one celled, non-septate mycelium can sometimes be formed.  Incomplete separation leads to some chains

one to four hat-shaped or spheroidal with tangential brims ascospores; ascospores formation can take place on Difco malt agar after 3 weeks at 25oC but may be sparse.

Ascus: arise without conjugation and are evanescent. Tendency of agglutination when released.

Floccose to mucoid sediment can be formed. No Pellicle  is formed.

variable use of nitrate and nitrite as N source; Variable use of Lysine, Ethylamine, Cadaverine, Tryptophan as sole N source; variable growth in vitamin-free medium, most strains require biotin and thiamin, some also require inositol.

Ecological Traits: (where found in nature)

Distinguishing Features: (unique traits that can be used to identify organism)

Production of 4EP and 4EG.  Growth on arginine with absolute requirement for biotin and thiamine.

Imparts strong flavors and aromas in wine that are often described as horse blanket like, barnyard, band aid and fecal

Produce acetic acid in wine, to yield off flavors and aromas.  Dekkera Anamola requires nutrients, and therefore can reduce vitamins and nutrients of a must.

Edwards, C. 2005. Illustrated guide to microbes and sediments in Wine, Beer and Juice.