1.      What is the temperature of fermentation?

Solution: the lower the temperature of fermentation the slower the rate of sugar consumption and of cell growth. If sluggishness is due to temperature the tank can be warmed and the fermentation will go more quickly. The graph shows a fermentation that was initiated at 14°C/57°F that was sluggish. The tank was slowly warmed to 25°C and the fermentation rate increased and took roughly a week to go to dryness. The strain was not harmed by being held for several days at a low temperature. Most commercial strains survive low temperatures and will initiate fermentation once the temperature is elevated.  Wild yeasts such asHanseniaspora uvarum (Klockera apiculata) will bloom at low temperatures but the strain is not a vigorous fermentor under these conditions. The yeast is apiculate and can be recognized under the microscope. Plating on WL media can also differentiate yeast species in musts and juices, but this is often not practical in a winery situation. Molecular methods can also be used to profile resident flora, but this also may not be practical enough for an immediate response to the situation. 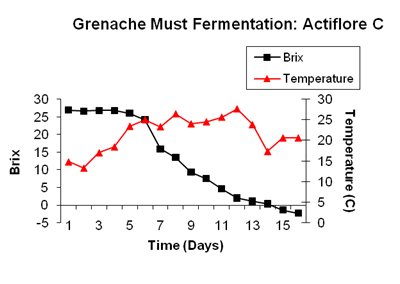 Solution: Fermentation rates are directly proportional to the available nutrients. Nutrients play two distinct roles: allowing biomass to build up to optimal levels and allowing individual cells to produce high levels of the enzymes of glycolysis. Both macronutrients (N, S, and P) and micronutrients (vitamins, minerals and co-factors) impact fermentation rate. Nitrogen is often the limiting macronutrient but a nitrogen deficiency can be accompanied by a phosphate deficiency. Use of diammonium phosphate provides N and P simultaneously. If a fermentation is sluggish, the nitrogen level should be determined and adjusted as needed. If nitrogen appears to be in ample supply, phosphate levels could be determined. Assessing vitamin levels is technically difficult so it is challenging to determine if a micronutrient deficiency exists.  A sample of the fermentation could be taken and supplemented with vitamins to see if fermentation is stimulated, taking care to also use a control sample of the same volume with no micronutrient addition. If the fermentation with the micronutrient becomes faster then the entire tank can receive a nutrient addition. If the smaller sample is mixed then the rate will be more rapid. It is important to have the unsupplemented control be treated the same as the sample receiving micronutrients so that it is clear that the micronutrient addition was responsible for the increased rate and not some other factor, like air exposure during taking the sample, warmer temperature of the laboratory room, or contamination with a different yeast strain. If a commercial yeast preparation was used then the strains should be at lower risk of a micronutrient deficiency. Excessive addition of micronutrients typically does not lead to rapid fermentation rates but it does provide a suite of nutrients for more fastidious organisms and can increase the chance of post-fermentation spoilage.

Solution: aeration of fermentations stimulates yeast biomass production and enhances ethanol tolerance. Oxygen is needed for the biosynthesis of fatty acids and if it is limiting the yeast must rely on the fatty acids available in the medium for growth. If the correct fatty acids are not available both fermentation rate and cell growth will be impacted. Sugar transporters require the correct fatty acid environment to perform optimally. There may still be transport in a suboptimal environment, but the fermentation will be slower. Sometimes all that is needed to increase the rate is to expose the yeast to oxygen via transfer, rack and return or splashing. If the yeast are metabolically active they will consume the oxygen and there will be no risk of oxidative damage to the juice or wine. If the strains are not active, oxygen could cause browning or aldehyde formation. If this is a concern, a bench trial can be performed to see if oxygen exposure is detrimental to the wine.

Solution: musts and juices with high populations of indigenous microbes may display a sluggish rate throughout fermentation. This could be due to one of two factors: reduction of available nutrients or the presence of inhibitory metabolites. Non-Saccharomyces yeasts require the same nutrients as Saccharomycesand if present and metabolically active will consume macro as well as micronutrients. Rates will be slower due to the nutritional deficiency. Again assessment of juice nitrogen level should indicate the level of supplementation needed.

The presence of inhibitory substances as a cause of a slow rate of fermentation may be more difficult to detect. The accumulation of organic and fatty acids can impose a stress on the yeast population and even lead to arrest of fermentation. The stress due to the toxic metabolite will increase as ethanol increases. The normal slow-down in fermentation caused by the presence of ethanol will be exacerbated by both the presence of inhibitory compounds and the loss of nutrients. The fermenting juice could be examined under a microscope but it will be difficult to determine if other microbes present prior to the increase in population density of Saccharomyces were a factor as they will be hard to see. The volatile acidity level can be evaluated and if it is high, that is an indication of the bioactivity of other organisms. Stripping methods can be used to decrease the volatile acidity level and fermentation should recommence at a faster pace.

Even wild strains of Saccharomyces have the potential to inhibit commercial strains. A weaker fermentor with poor ethanol tolerance may be quite competitive early in the fermentation depleting nutrients and building up biomass that then will not be able to sustain the fermentation rate but that will be able to continue to inhibit the strain that is conducting the fermentation. The weaker strain may produce killer factor and if the commercial strain is sensitive to this inhibitory peptide cells will lose viability. Most commercial strains are resistant to killer factor so this is not generally a problem. However yeast strains grow to a final cell density based upon their recognition of each other. A weaker strain that is still viable will contribute to the density assessment. The numbers of the stronger strain will be held in check by the presence of the weaker strain and thus fermentation rates will be the sum of the two strains, not the equivalent of the faster strain. The sluggish fermentation should be examined under the microscope. A cell counting chamber can be used to assess cell numbers. If cell density appears to be high but fermentation is slow, removal of the yeast biomass should allow the stronger strain to grow to a higher density and to complete the fermentation.

Solution: yeast strains display differences in tolerance of high osmolarity. Some strains may have difficulty in conducting the early stages of fermentation of high Brix juices. There are several commercial strains that are tolerant of high Brix situations and that have high ethanol tolerances as well. If the high Brix fermentation is sluggish then a different strain should be used as inoculant.

Solution: some yeast strains ferment more slowly than others. It is important if there is a sluggish fermentation with a commercial strain to check the nutritional needs of the strain and to determine if it was rehydrated and added at a proper dose. Sometimes a slow inoculated fermentation is slow because the indigenous yeast are actually conducting it and the inoculant has lost viability due to improper rehydration techniques or use of strains past the expiration date.

If using an active fermentation as an inoculation it is important to make sure that Saccharomyces is actually in the tank. There have been instances when the inoculation tank due to pH and temperature was actually full of lactic acid bacteria so not only was Saccharomyces not being inoculated the tanks were receiving a high dose of wild lactics instead. If concentrate is used to make a starter culture it is important to make sure the concentrate is not contaminated with a yeast other than Saccharomyces like Zygosaccharomyces. This strain has also caused problems for some wineries when it dominates the inoculant culture. The strain conducting the fermentation can be isolated and analyzed to determine if it is the same as the inoculant, but most often in this situation re-inoculation would be preferred.

For uninoculated indigenous flora fermentations the majority of the time a strain of Saccharomyces will dominate the fermentation. The wild strains may simply have slower rates of fermentation than typical, or be fermenting slowly because of accumulation of inhibitory end products of other organisms or competition for nutrients. On occasion, Saccharomyces does not dominate and too high of an acetic acid level may have arisen in the fermentation. In some wineries, Candida not Saccharomyces is the dominant member of the winery flora and will be present in and conduct fermentations. Depending upon the conditions the Candidafermentation may not be as rapid as that of Saccharomyces but under the microscope the two yeasts would not be distinguishable.

Solution: a low level of inoculation may allow indigenous populations to build in the fermentation leading to nutrient depletion and appearance of inhibitory metabolites. See Q4 on bioloads. If the inoculation is too high problems may also result. In this case the high inoculation level leads to a depletion of nutrients from the juice such that most cells get some but not enough micronutrients to grow or to ferment optimally. In this case the yeast bioload should be reduced, nutrient levels assessed and readjusted. In this case it is often not necessary to reinoculate as the cells remaining in the fermentation will be able to grow and complete fermentation.

Solution: fermentation can be inhibited at pH values below 3.0. Yeast release hydrogen ions during metabolism and can drop the pH below the starting level. The pH of the juice should be evaluated. If it is too low, the ph should be adjusted. Similarly very high pH values can encourage the simultaneous growth ofLactobacillus. Some of the Lactobacillus strains are inhibitory to yeast fermentation. Examining the juice under the microscope should reveal the presence of lactic acid bacteria. Sulfite can be used to control their populations but if inhibitory compounds have been made the fermentation rate will not improve and may become even more sluggish as ethanol accumulates.

Solution: errors in addition of sulfite can lead to a sluggish fermentation while the yeast detoxify the excess sulfite in their environment. Strains are generally able to recover from the presence of sulfite and to eventually grow in the juice and ferment. The rate of fermentation may be impacted by the presence of the sulfite and the need to detoxify it by forming an adjunct with acetaldehyde. Some yeast strains are more sensitive to sulfite than others, but most of the commercial strains show good sulfite tolerance. If the sulfite level is found to be high then a strain with high sulfite tolerance should be used to reinoculate the fermentation. Indigenous strain fermentations, particularly if they are conducted by vineyard rather than winery flora may be more sensitive to mistakes in addition of sulfite.