Esters can contribute positively to the aroma of a wine. In low concentrations these compounds are perceived as generically fruity or floral and can boost the awareness of the innate fruit and floral characteristics of the grape varietal. However if they are present in too high of a concentration they can mask the other varietal aromas and yield a synthetic fruit or fruit candy aroma to the wine decreasing wine complexity. As with some of the sulfur compounds, low concentrations are desirable, high concentrations may negatively impact the wine. The level of ester production that will cause a problem is dependent upon the composition of the wine and the matrix and its characteristic varietal odor impact compounds.

There are two classes of esters formed in wine the ethyl esters and the acetate esters. Esters derive from the combination of an alcohol with an acid. Enzymes transfer the acyl moiety (acid group) of an acyl-CoA conjugate to a receptor alcohol. The alcohol can be ethanol or any alcohol produced as a degradation product by yeast cells. Aside from ethanol common alcohols found in esters derive from the degradation of amino acids. The most common acyl-CoA molecule found in yeast is acetyl-CoA and thus the most common esters are acetate esters. At low concentrations esters can add complexity to a wine and due to their generic floral and fruity notes enhance the aroma characteristics of the varietal. High concentrations of esters can be objectionable depending upon the matrix of the wine. Wines containing more than 90 mg/L of ethyl acetate or 200 mg/L of total esters are considered defective.

Esters are formed for three key reasons. First esters are generally less toxic than their alcohol or acidic precursor molecules so the formation of esters can be a detoxification mechanism. Second, esters are insect attractants and signaling molecules. The formation of esters serves to attract insects to the fermentation and culture of yeast so that they may be spread. A third reason for forming esters is the regeneration of free Coenzyme A from its conjugates. During fatty acid biosynthesis and degradation fatty acyl-CoA molecules are formed. If biosynthesis or degradation is interrupted, the bound Co-A can be released by reaction with an alcohol. 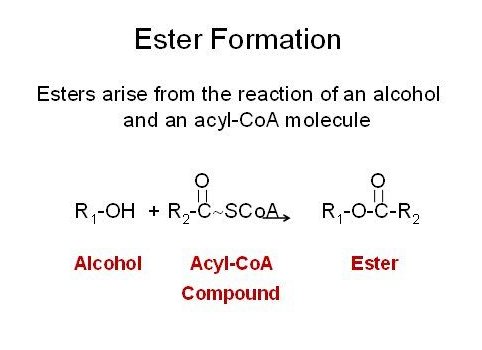 In addition to synthesizing esters, yeast also make esterases that cleave these compounds to their original alcohol and acid moieties. Ester production varies with yeast strains and there is a family of enzymes responsible for ester formation and degradation.  Differences in the expression or activity of this class of compounds can account of the variation in ester levels in different yeast strains. The common esters found in wine are shown in the following table.

1Thresholds vary by the matrix of the solution tested. The variation in number indicates different matrix conditions were evaluated.  Thresholds should always be viewed with caution.

Ethyl acetate is the principle aroma component of wine vinegar. It is described as glue, solvent, nail polish in high concentrations. Ethyl acetate is produced by the wild yeasts, particularly Hanseniaspora uvarum (Kloeckera apiculata). H. uvarum is a normal resident of the berry surface, and is often found in high numbers in juice. It is readily inhibited by inoculation with Saccharomyces, but is more tolerant of low temperature conditions than Saccharomyces. Pre-fermentation cold soaks encourage a bloom of H. uvarum. Since ethyl acetate is an ester it is volatile and may be driven off during fermentation if fermentation is vigorous enough. It may also be hydrolyzed at the low pH of wine. However if a high concentration is present the compound can still be present at the time of bottling in at a high enough level to be detected.

The C10 to C12 fatty acid esters derive from either the degradation of fatty acids or from fatty acid biosynthesis. In both processes Coenzyme A is involved. In biosynthesis acetyl molecules are added sequentially to the growing acyl chain to yield C16 and C18 fatty acids. If biosynthesis is arrested then the cell will need to free the CoA from the conjugate, but at the same time not release potentially toxic fatty acids. The formation of an ester between the fatty acid moiety and ethanol serves to fee the CoA as well as to create a non-toxic volatile ester that can be secreted from the cell. Similarly, fatty acid degradation occurs by attaching the fatty acid to a Coenzyme A molecule then degrading the molecule in two carbon acetate units. As with biosynthesis if degradation is interrupted, CoA will be released via the formation of an ester of the attached acyl chain. Fatty acid ester formation occurs when oxygen is present then consumed and no longer available. Oxygen is needed for synthesis of unsaturated fatty acids. Fatty acid ester formation can also occur late in fermentation as cellular fatty acids are being degraded.

The C6 and C8 esters could arise from fatty acid catabolism or biosynthesis as well. However, the grape makes C6 and C8 alcohols and the esters of C6 and C8 compounds may represent detoxification of these components if they are taken up by the cells.

Both ethyl and acetate esters can form from the degradation or biosynthesis of amino acids. Biosynthetic and degradative reactions generate acid and alcohol forms of the carbon skeletons of amino acids. The acidic forms can react with ethanol to form ethyl esters and the alcohol derivatives can react with acetylCo-A to form acetate esters. The most important esters from a sensory perspective come from the leucine family of amino acids and from phenylalanine. Esters are also formed from carbon skeletons of other amino acids, but these compounds are rarely near let alone over their thresholds of detection.

Since esters can from either during the amino acid biosynthesis or degradation process it is difficult to assess the impact of juice nitrogen content and supplementation on ester production. Some studies have shown the highest ester content occurs with diammonium phosphate (DAP) supplementation (biosynthesis driven) while others have shown the opposite that the highest ester content is amino acid content driven and inhibited by the use of DAP (degradation driven). Both conclusions are likely correct and it depends upon whether or not ester formation accompanies biosynthesis or degradation in the strain and juice conditions being evaluated.