1.      What is the temperature of fermentation?

Solution: the warmer the temperature the faster the rate of fermentation. Heat is released during sugar catabolism and at high metabolic rates enough heat can be released to elevate the temperature of the fermentation to an inhibitory level (above 42°C/108°F). In red fermentations the highest metabolic activity will occur in the cap and the cap temperatures can be as much as 10°C warmer than the rest of the tank. The heat generated at this time is important for extraction of skin components. However heat can also elevate rates of hydrolysis of bound aroma compounds and elevated rates of volatilization of those compounds. Tank mixing and cap management strategies (irrigation, pumping over, punch downs) can be used to control cap temperature. Probes monitoring cap temperature are important as a juice temperature probe will not provide accurate readings of how hot the cap above is getting. Oxygen exposure due to aeration during cap management practices can also stimulate fermentation and lead to sustained rapid rates in the fermentation as ethanol accumulates. Hot fermentations are generally not as complex as lower temperature fermentations but the trade-off in red wine production is to attain sufficient extraction of color and flavor precursors but not to drive off important volatile components.

Solution: the higher the nutrient level the faster the rate of fermentation. High nutrients lead to maximal biomass production and also to maximal fermentative activity of that biomass. If fermentations are too rapid then the nutrient levels and addition practices should be reexamined. In one study of nitrogen variation by fermentation lot of a randomized harvested Merlot vineyard FAN was found to vary over two-fold across the tank lots. If only a single lot is evaluated and identical additions made to all tanks the nutrient level of some tanks may be excessive. Once nutrients have been added they cannot be removed so care should be taken at this step. If a particular vineyard seems to lead to rapid hot ferments, then a stepwise addition regimen for nutrients should be employed to avoid explosive fermentation rates.  Also, strains with high nitrogen requirements can be used in high nitrogen juices as the fermentation rates should be less vigorous under these conditions.

As with sulfite additions, it can be easy to make an error in a nutrient addition. The most common mistakes result from simple calculation errors and incorrect estimation of tank volumes. Again such calculations should be done well ahead of crush. Another common mistake is to not pay attention to the dosing levels on the package, to rehydrate an entire package of nutrients and then use the whole thing rather than waste it. If tanks are uniformly filled and historically FAN levels are consistent across vintages then the proper nutrient doses can be weighed out ahead of time so that smaller portions are rehydrated. The more calculations that can be done ahead of crush the better.

Solution: cold soaks and holding of fruit or juice post-harvest but prefermentation can result in the buildup of high initial populations of fermentative microorganisms which may or may not be Saccharomyces. The large bioload of these organisms can result in a very rapid onset of apparent fermentation once the tank is warmed. High rot conditions can also lead to a rapid fermentation. Following holding treatments of any kind, the juice should be examined under a microscope to assess the microbial populations present. Sulfite can be used to reduce bacterial bioloads and DMDC (dimethyldicarbonate) can be used to reduce wild yeast populations. This is only necessary if fermentations are initiating too quickly.

The initiation of uninoculated or indigenous strain fermentations is highly variable and unpredictable. Generally these fermentations initiate more slowly than one inoculated to a level of 106 cells/mL, but bioloads of held juices or grapes with significant rot can approach or exceed this level of inoculation. The indigenous strains may be well-adapted to the growth conditions in the must and not display a pre-fermentation onset lag. Again temperature chilling can be used to reduce the rate of fermentation and to foster retention of volatile compounds.

Solution: some yeast strains are simply vigorous fermentors. If possible a less vigorous strain could be used in the future. Chilling can be used to control an existing fermentation taking care to not lower the temperature too quickly. The nutrient level should also be matched to the needs of the strain. The recommended nutrient levels should be viewed as the target to aim for not a minimal requirement. There is a strong interaction between strain and juice composition so a strain that appears highly vigorous in one juice may not be in other juices due to compositional differences.

Fermentations inoculated from existing active ferments can also yield very rapid and hot starts. The yeast are well adapted to the conditions of the juice and are metabolically at their peak of activity. Dilution into a new juice will not necessarily lead to a lag phase and populations will rebuild quickly and fermentations start rapidly. Again, temperature control can be used to reduce the rate of these fermentations and to retain volatiles.

Solution: high inoculation levels can also lead to more rapid initial fermentation rates and heat generation in the tank. Growth rates are rapid because no inhibitory ethanol conditions exist in the tank. Nutrients go further because a larger percentage of the population was fed prior to inoculation. High inoculation levels can result from inaccurate starter culture dosing of the tank. Frequently excessive dosing is due to misreading of the packet instructions, rehydrating an entire packet then deciding to use it rather than waste it, or multiple inoculations of the same tank due to poor record-keeping. Tanks inoculated with 108 to 109cells/mL often show rapid starts but yield off-odors and have difficulty completing fermentation. If too high of an inoculation has occurred it would be best to dilute the population either by blending with incoming juices of the same varietal or settling, centrifuging or filtering to remove cells from juice. Use of antimicrobial compounds or heating to kill a significant proportion of the population is not recommended as this may lead to subsequent problems with progression of the fermentation.

Solution: as shown in the graph the higher the solids level the faster the rate of white juice fermentations. Depending upon cold settling processes and use of enzymatic treatments, centrifugation, flotation or filtration to reduce solids, solids levels generally vary from 2 to 5%. In this sample fermentation the very low solids level (following sterile filtration of the must) arrested fermentation while the high solids level (6.25%) was very rapid. If a white fermentation displays a rapid rate the solids level should be checked. Once fermentation has started it will be difficult to remove the excess solids as yeast will be removed at the same time. Temperature could be reduced to lower fermentation rate. Solids contain esterases and therefore can reduce wine volatiles. 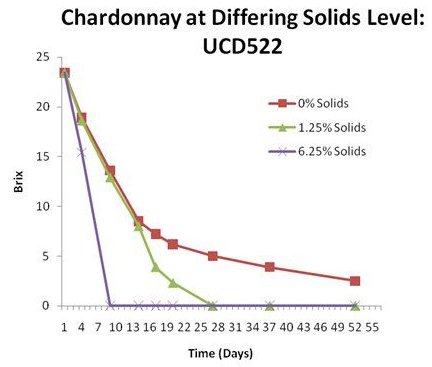