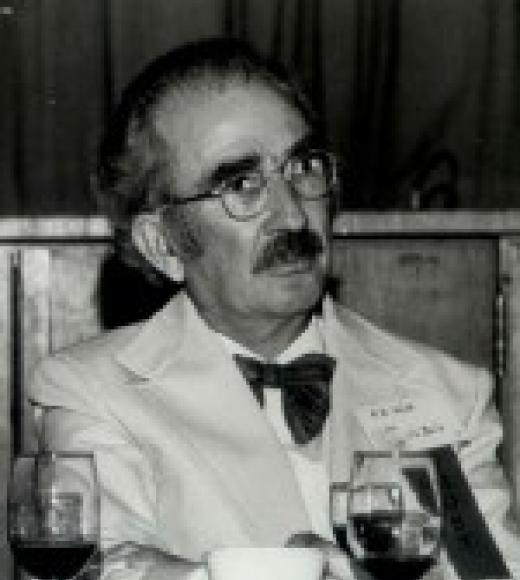 Albert Dinsmoor “Dinny” Webb died August 8, 2003 at home in Woodland, California (recently moved from Willowbank, Davis, CA) after a number of ills culminating in liver cancer. He was born in Victorville, California on October 10, 1917, oldest of four children of Ralph and Vida Webb. He obtained a Bachelor of Science degree in chemistry from the University of California, Berkeley (UCB) in 1939.  That fall he was employed as chemist at E. & J. Gallo winery and the following year similarly at the Petri Wine Company. In 1941 he became a technician aiding Professor Maynard Amerine in the Viticulture and Enology Department at the University of California at Davis (UCD). Initially deferred, he stayed on as the three enology professors at that time were called up as military reservists in World War II until the Department was closed for the duration. He then joined a research group at UCB working on methods of recovering manganese for use in steels. Shortly, he joined what became the Manhattan Project, first at UCB and then UCD. In October, 1943, he and his new bride, Nancy Mathews, moved to Oak Ridge, Tennessee, where he had badge number 202, one of the earliest. Work there, related to preparation of U-235 for the atomic bomb, was 12 hours per day, seven days a week until the successful detonation at Alamagordo, New Mexico.

In 1945, Webb returned to Davis as a graduate student, assisting with chemistry classes and commuting to UCB for graduate classes. Requirements for his Ph.D. were completed in August 1948, and in June of 1949, he and four others became the first Ph.D.s awarded on the UCD campus. UC President Robert Gordon Sproul came up from Berkeley to perform the official ceremony. In 1948, he was offered a position as an assistant professor in dairy science at UCD, but Dr. Winkler in Viticulture & Enology decided to match the offer. Dinny joined the latter Department and stayed until retirement in 1982. He became full professor in 1960 and was Department chairman from 1973 to 1981. Among his many committee services, perhaps the two most important were chair, Systemwide Senate Research Committee and chair, Davis Academic Senate Committee on Privilege and Tenure.

Professor Webb taught the winemaking class (VEN 124) and the graduate seminar (VEN 290) for many years, as well as mentoring a number of graduate students. Owing, originally, to the lack of an adequate research laboratory, he cooperated closely with Professor Richard Kepner in the UCD Department of Chemistry. By 1984, he and his colleagues and students had published 140 items including major textbooks, chapters, and reviews. Among his doctoral graduates, two became the professors of enology at different universities, one the president of a university, and a fourth the senior research scientist at Philip Morris, Inc. Many of his students became winemakers of note.

His research was extensive and varied, involving, especially, aroma compounds and red pigments of wines and grapes. He and Dr. Kepner built gas chromatographic equipment in the very early days (before commercially available). Then and later with advanced equipment, they applied that technique to identification and quantification of volatile aroma compounds in wines. Several hundred were identified, many for the first time. His research also included studies on the formation (and its control) of higher alcohols by yeasts. Another major area was the identification of individual anthocyanin pigments in grapes and wines. They showed that, although the total amount of these pigments was influenced by season and climate, the qualitative content and relative proportions were set by the genetics of the grape variety. Thus, the identification and authenticity of grapes and their wines could be established. Two specific examples are the absence of acylated pigments in Pinot noir grapes and close relatives, and  diglucoside pigments in grapes native to the New World and their hybrids, but only monoglucosides in the pure European Vitis vinifera.

In Australia and continued afterward, he researched upon flor-type sherries and maintained a small solera in the University cellar, as well as at home. In Finland, he researched the possibility that a minor constituent of wine and all other products fermented by yeasts, gamma-butyrolactone, was a factor in the calming effect of wine. Perhaps fortunately, it was not.

He had many other interests including plate-block stamp collecting. On his Willowbank property, he grew a small vineyard and made Ruby Cabernet wine every year. Attendees at his memorial service were able to taste the 2001 vintage.

Dinny is described as capable, courteous, fair, approachable, and given to carefully considered answers. Seemingly reserved, he drove a red Porsche. He always wore real (self-tied) bow ties, often colorful, but not flamboyant. At one of the final examinations in the winemaking class, a student (now a noted winemaker) came wearing a cardboard bow tie about two feet wide. Dinny’s comment was, “I’m glad to see some of the students are appropriately attired”!