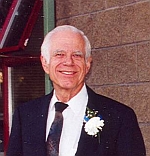 Davis resident Wendell Jacob is the son of former V&E Faculty member, Harry E. Jacob. Harry E. Jacob was a UC Davis faculty member from 1921 until his death in 1949. The elder Jacob was one of the early faculty members, who worked in the department when it was still part of the Berkeley campus. Wendell was a young man of 20 when his father passed away; yet over the years, he met many grape growers who came to his father for advice. The younger Jacob has been a staunch supporter of the department his father loved so well; he has given to the research facility at Oakville that bears his father’s name and the heritage vineyard that will be planted near the new academic building and winery near the south entrance to campus.

Jacob is also a film aficionado. He turned his ownership in the Colfax Theatre over to his granddaughter, Paris Endicott-Chase on her 13th birthday in September of 2006. He bought the theater in 1986 and spent the next three years restoring it. The refurbished theater reopened in 1989 and has been a mainstay in the life of the tiny foothill hamlet ever since.